This week there wasn’t much work to do as everyone was slowly winding back up after the Christmas break so we went back to the land on Wednesday to make an early start getting the roof on. The roofing material we’re using contains asbestos so we both wore masks while working around the house until after we’d finished moving it around and drilling it. It was a bit difficult accessing the top parts of the house now since we couldn’t climb the frame from the inside with the roof covering it, so Beth whipped up a ladder from some scrap bits of wood in another blatant violation of safety regulations 😉 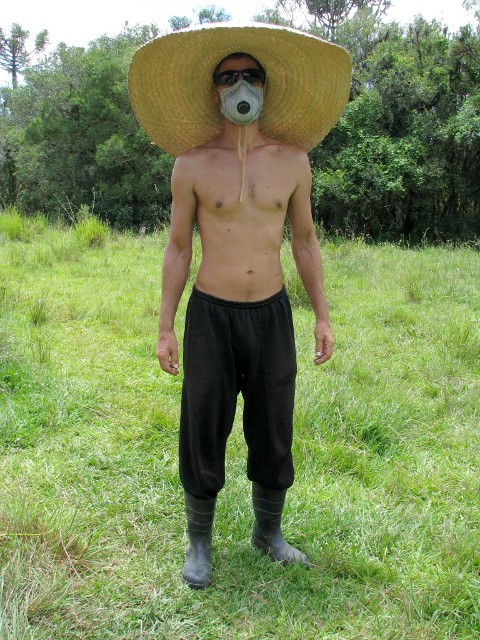 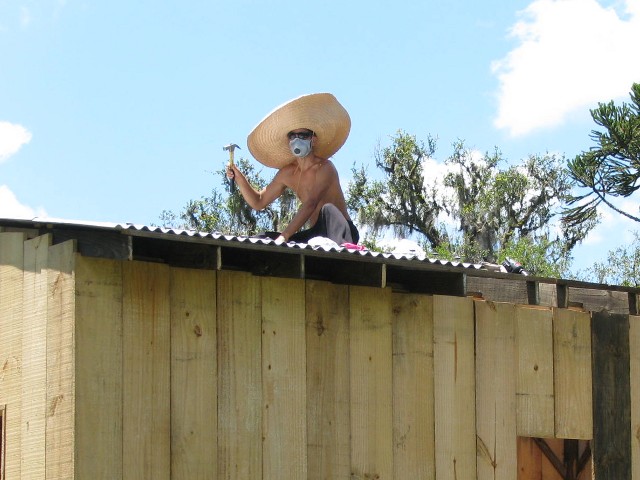 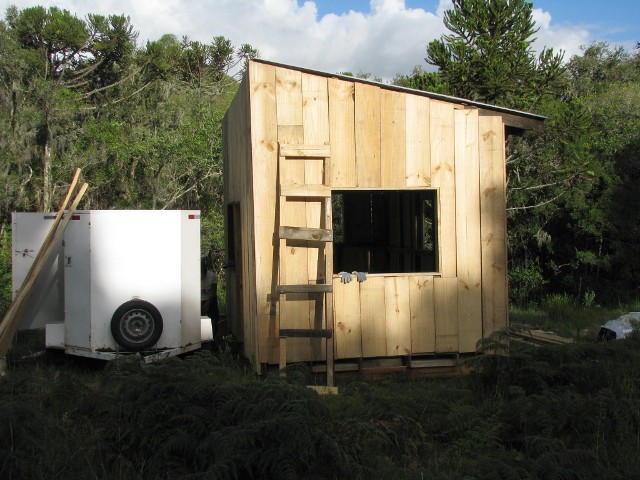 It took most of the day to get the roof on, but once done it was really starting to feel like a proper house! the next day we had our first meal in the house which felt like some sort of special oriental tea ceremony since we had to sit on the floor 🙂

On Friday I saw a snake for the first time since our arrival three months ago! I was coming back from our beach when suddenly a dark green snake about a metre or so long and an inch thick sprung up in the middle of the path and darted off into the bush. I think it was most likely a Philodryas patagoniensis which are found around here (as well as in Uruguay, Paraguay, Bolivia and Argentina) and are fairly harmless. I didn’t have time to take a photo as it was moving too quickly, but I found one on the net which looks almost identical. The other two photos below are of a huge nice looking caterpillar which had climbed onto our table, and one of the hawks we see flying around here a lot but haven’t until now got a photo of

In the weekend we decided to have a break from working on the house and do something else, so we thought it’d be a good idea to test out our Petrycoski wood burning oven 🙂 Claudio Petrycoski set up a company here in southern Brazil many years ago making the best ovens in Brazil which later became the famous “Atlas” brand of ovens. Being of Russian decent, the original Petrycoski wood-burning ovens are extremely sturdy like our Lada Niva! Our Petrycoski weighs over 100Kg, but back in Russia these are considered to be little more than simple portable camp burners that the tough Russian mothers carry with them when the family goes hiking in Siberia – the picture below shows a typical Russian mama collecting fire wood. We had to shift the Petrycoski from the place where everything was unloaded off the truck, and take it in the car across the bridge and through the woods to where our house is being built – and all without the help of a Russian mama! 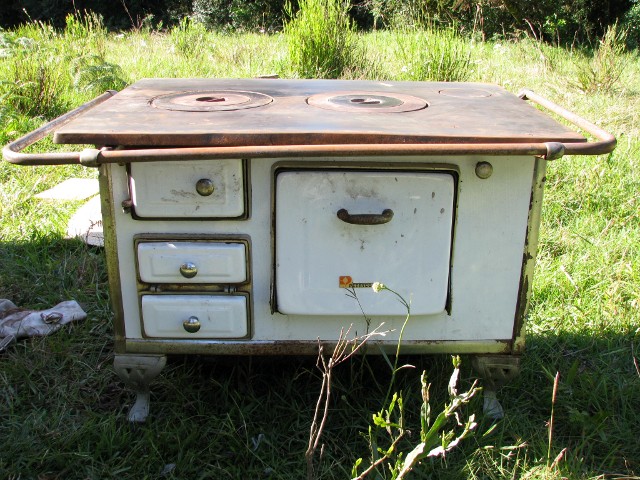 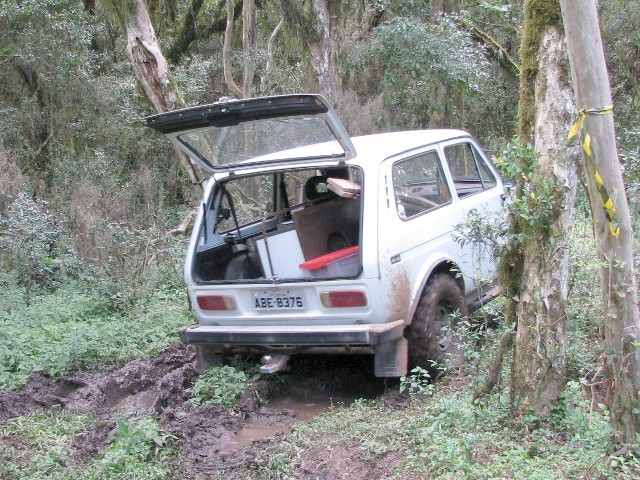 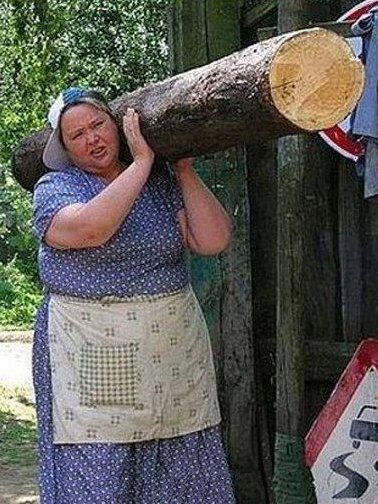 We finally got the thing shifted to a position next to our house for testing with only minor injuries, but it was well worth the effort! I was able to get it going pretty quickly and before long we were boiling the kettle and cooking lunch on it 🙂 Beth loves it too, it’s an excellent design that has a spacious cooking surface, and plenty of room surrounding the cooking areas that serve to keep other pots and pans warm after they’re cooked. Also once it’s going it requires very little maintenance, small logs can be just thrown in without worrying about positioning as it works more like a furnace than an open fire. 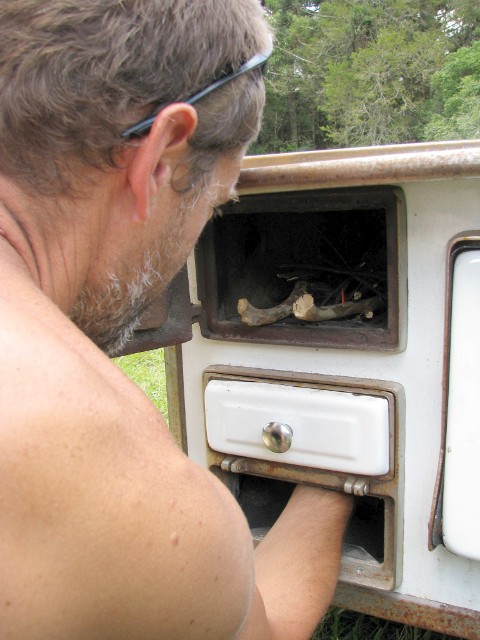 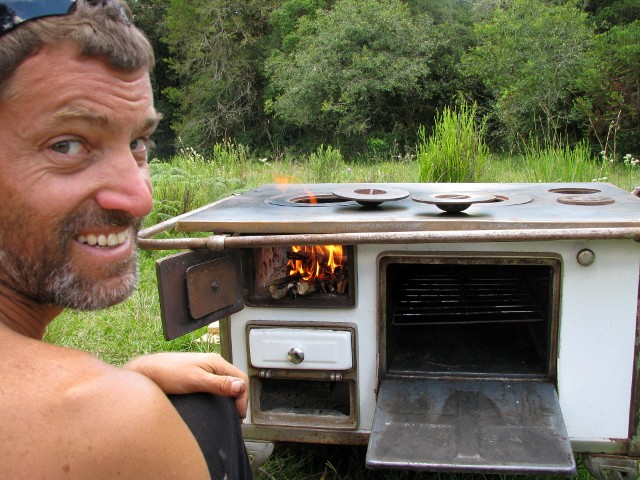 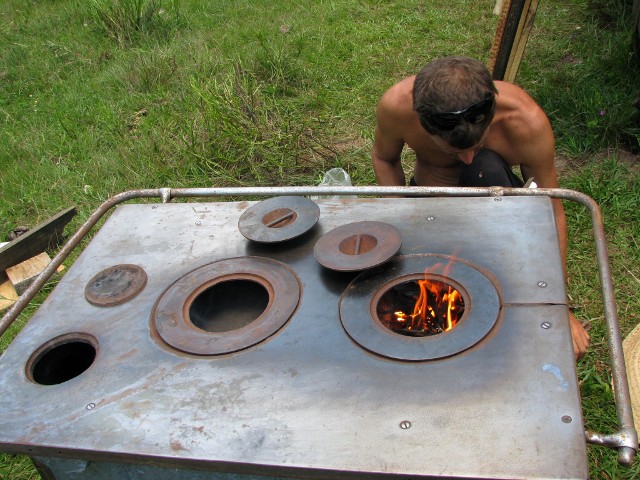 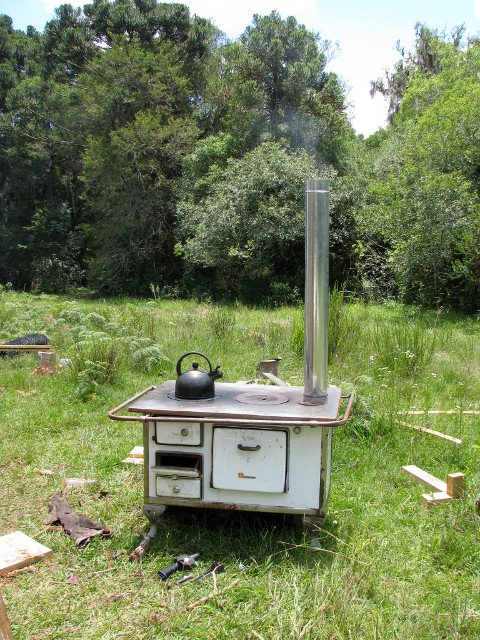 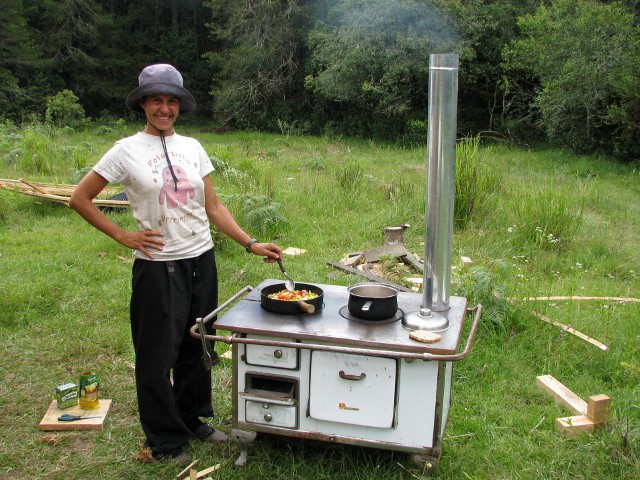