This has probably been the most frustrating week we’ve had so far. On the day we were going to come back to the land the car had a flat tyre, so I put the spare on but then it wouldn’t start! we decided to get a truck to deliver all the stuff we’d bought instead of taking the car as we needed to pay for the wood to be delivered anyway. We’d ordered 24 sheets of 8mm ply for the inside walls and ceiling and some extras to make some shelves out of. Also we got some polystyrene panels and 200m of PVC pipe for protecting the net cables which were starting to perish and wear.

When we got there Beth got started on her shelf compartments and I got started on the cable protection. We’ve both been getting more and more frustrated with everything being piled into the trailer where it’s extremely hard to find and get at, so Beth decided to make a whole lot of boxes each divided into three by two shelves. Here’s some pictures of the first three which have already made things a lot more accessible 🙂 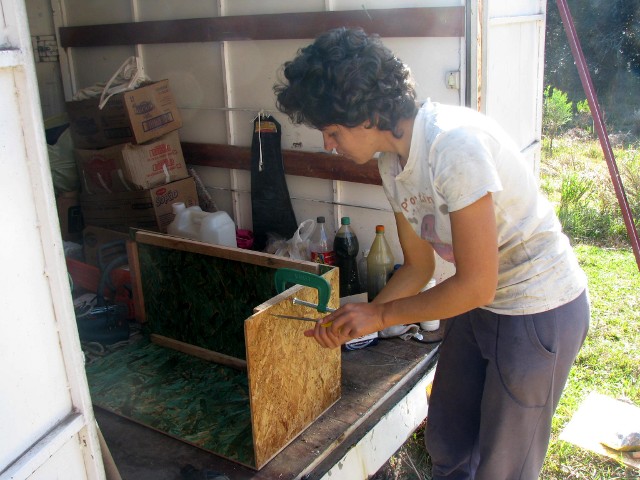 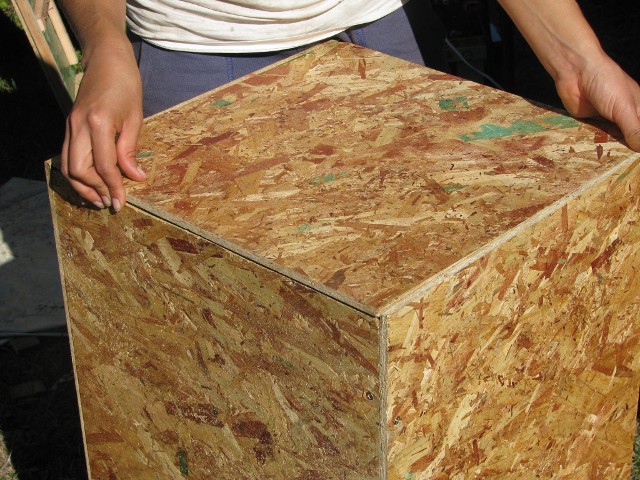 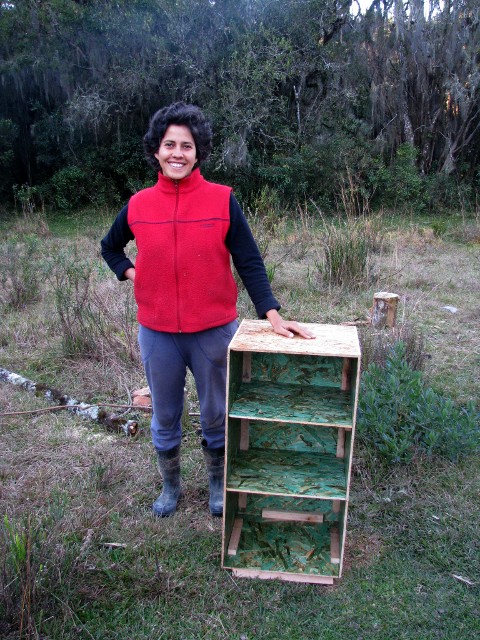 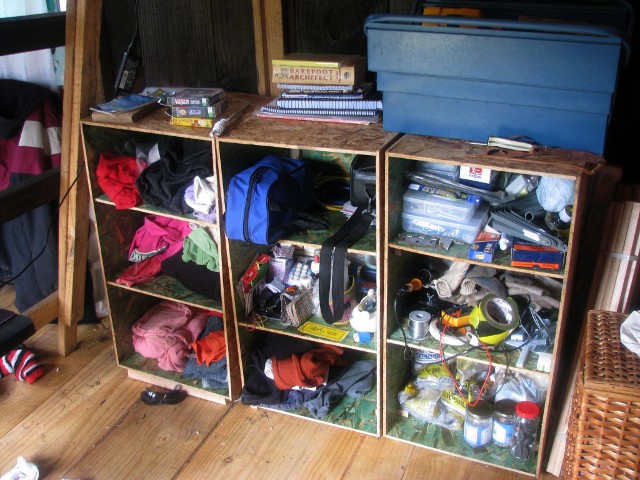 The cables had got much more badly damaged since last time I checked and the net wasn’t working, and unfortunately the job of getting the cables through the PVC pipe was far more difficult than expected 🙁 my plan was to use a weight tied to string to use gravity to pull string through and then pull the cables through with the string.

A thin cylindrical lead fishing sinker would be ideal, but I didn’t have anything like that, so instead I made a weight using a six inch nail with the end chopped off. The first problem we encountered was that just lifting segments of the pipe to create a locallised incline for the weight to slide down didn’t provide enough force to pull the string after about twenty metres, but we found that laying the pipe down the side of the hill solved this problem very well and the weight could be coaxed through quite easily. 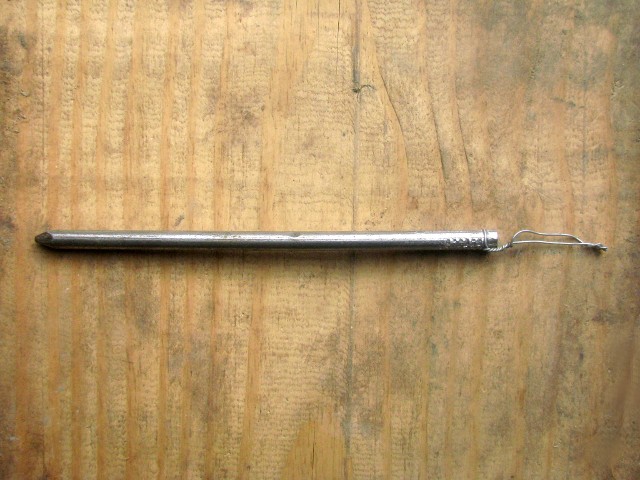 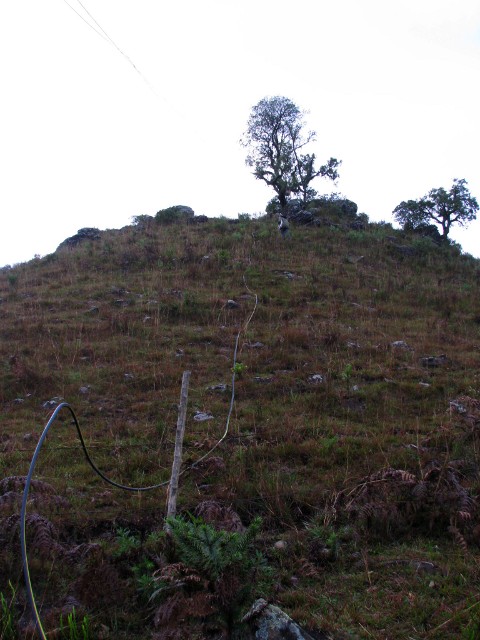 And to make matters worse I was getting badly behind on work without having net and there were no buses back until the weekend, so I had to set up a temporary method of getting net access which was to create a windable reel out of some plywood and other bits and bobs we had around and reel the cables out from the house to the pole each day. They have to be reeled in at night as the cows are often walking in the trees and could drag them along with their hooves or chew them.

Beth’s off to Canela today (Saturday) to get some strong fishing line which should be even easier to get through the pipe than the string, yet strong enough to pull the cables through directly without requiring the intermediate step of putting fencing wire through first. She left at 7am to catch the 9am bus and then will catch the 2pm bus back again.

It’s Sunday afternoon now and we’ve finally completed getting the first 100m segment of cable into its PVC pipe! Beth arrived back yesterday evening with some strong fishing line made for reeling in thrashing 55Kg fishes and also some thick nylon string as a backup measure. Both of them were so strong that I was unable to break them while wearing thick leather gloves. We got up early and had some breakfast and lemon tea and then both went up the hill about 9am to try the process again. The nail went through quite easily with the fishing line, and then I attached it at the bottom to the cables. We needed to ensure that the connection was extremely strong since a lot of force would be required to pull the cables through. I put a double knot on every pair of the LAN cable and knotted the power cable in two places then knotted the fishing line through all these other knots. I then put insulating tape around it all to ensure there were no rough edges to cause unwanted friction.

The force required to pull cables through was extreme, it was much more than when we were pulling them through last time with the fencing wire. I’m pretty sure the problem is due to the cables being coiled and uncoiled over the last couple of days which has made them much less straight and therefore causes much more friction. It took about two hours to pull them through and it was incredibly tiring, each strong pull would bring in only 10 or 20cm and it would have to be held firm before the next pull otherwise it would recoil back in again! but it did finally get through at last! I’ve learned a few important lessons about this process:

Just as I was about to come down from the hill after I’d finished pulling the cables through I stepped next to a rock and a large snake sprang into the air in front of me! I jumped back and it lay still, I tried banging some things to scare it away but it just stayed perfectly still, so I kept packing my things up keeping a wary eye on it and then came down – not before getting a good photo of it though 😉 this is the second snake I’ve seen here, but I didn’t get a photo last time.

I then attached the cables into the pole and laid the PVC pipe through the swamp to our house for testing. As you can see by me typing this, it’s working! (whew!). One last finishing touch for today was to whip up a couple of metal braces from some roofing iron scraps to fasten the pipe firmly to the pole. I’ll also need to peg it to the ground to prevent cows tripping on it, but that’ll have to wait as I’m too tired for that today! 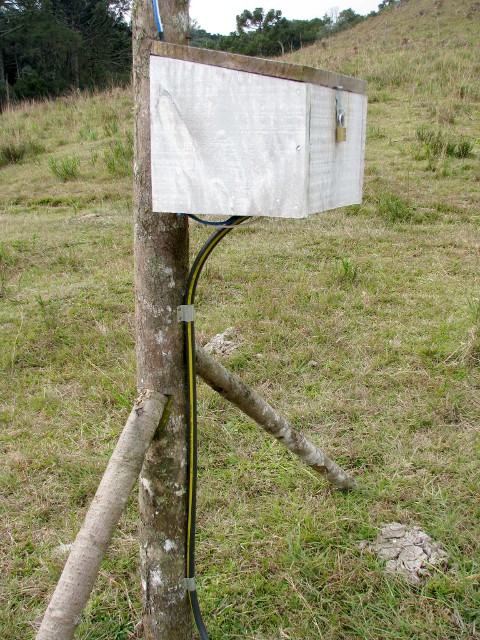 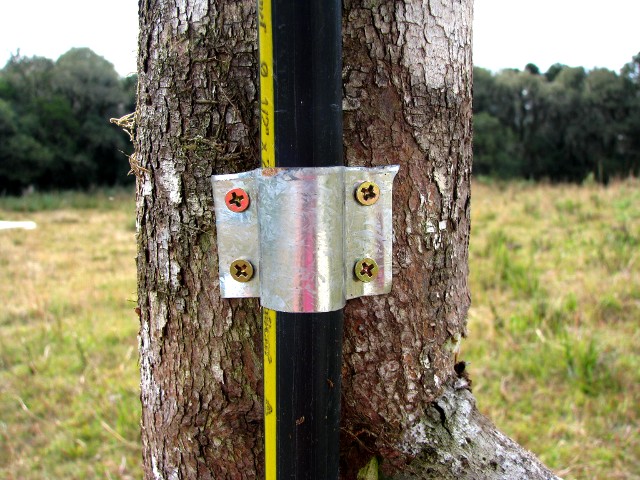