This week started back in Canela with the starter motor dying for the third time! What happens is that the brush connections melt and need to be resoldered, but since it’s happened for the third time now, we’re going to take it to a different mechanic and see if he can do a better job, or if not we may have to get a new starter motor. We’ve had a lot of expenses this month, so we’ve decided to leave the car repairs for a while and have a go at being car-independent by using the bus, cycling and walking!

I then did some tests on the transformers I bought for powering our net connection using just a LAN cable, only to find that the method is too inefficient over the distance required, so we’ll require a separate power cable after all 🙁 The final picture below shows the transformers connected by a 120 metre length of LAN cable powering a 15W light bulb using the 220 volt car inverter. It shows that the voltage has dropped from 220 volts to only 66 volts. Although the mechanism could quite easily be configured to double this to a usable 130 volts or so, the wasted power radiated from the cable as heat would be around 20 watts which isn’t practical since we have to generate all our own power. See our rural net connection for more details about this.

I took the transformers back today and luckily the hardware store was nice enough to refund me the R$60 for them, I then bought 100 metre roll of 2x1mm power cable for about R$90 which is enough to get the first half of the cabling in place. This is quite thin cable, but should be fine since at 220 volts it only needs to carry about 100mA. The losses are proportional to the square of the current, so now that we’re using twenty times less current (since we’re supplying the same power but using twenty times more voltage to do it), the losses will be at least 400 times less. Putting a high voltage through the LAN cable pairs is not an option even at such a low current because the higher voltage will interfere with the network signal since the wires are unshielded.

Today our Christmas present from Mum and Dad finally made it through the Brazilian postal system – only two months late – but better late than never! It was two blocks of our favourite chocolate – Whittaker’s hazelnut chocolate! and two NZ style standard 50c potato peelers – I’ve really missed those! so tonight we’re having a potato pie 🙂 it’s my job to peel the potatoes for it – here’s a pic of me doing the extremely difficult double-peel manoeuvre! 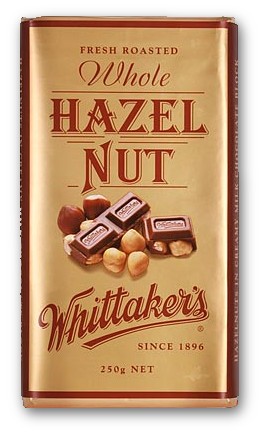 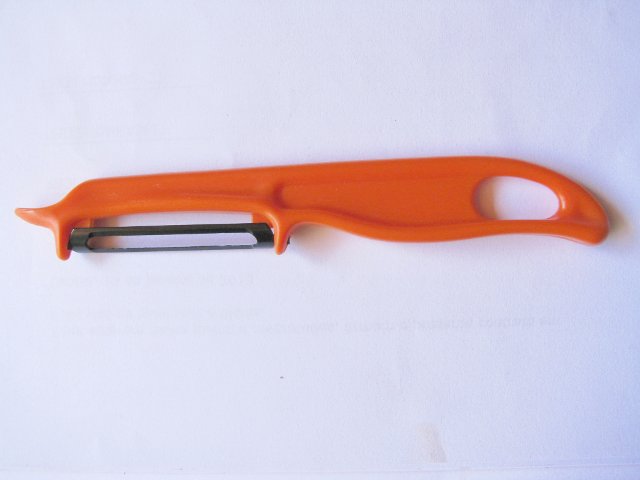 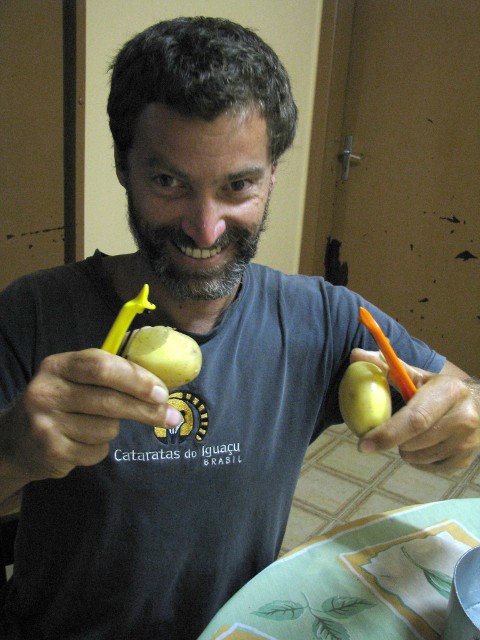 On Wednesday we headed for the land without the car for the first time! we caught the Bom Jesus (pronounced “Bong Jayzoo”) bus that goes past the church at point “C” in our map shown above in Week thirteen. Luckily Candido was there working on a nearby farm and offered to give us a ride from there to the land, so that saved us a couple of hours of walking with heavy bags 🙂

The main thing we wanted to get done this time at the land was to get some temporary windows and a door in place so that we could move our things out of the tent and into the house. The tent is really on its last legs and we’re always worried about storms and having to shout at visiting cows in the middle of the night in case they trip over the tent cords! The first thing we did was to nail some floor boards onto the loft which is where we’ll be sleeping – but because we haven’t got the thin planks ordered yet to block up the gaps between the wall boards, we decided to move the inner part of the tent into the house on the loft so we can move in now even though its not waterproof yet. After moving out of the tent we had a nice candle lit dinner and finished off the Chilean merlot 🙂

The next day I made a basic door out of three of the left over floor boards, and Beth made some sliding windows with small pieces of scrap wood and clear plastic – we can’t make the proper doors and windows yet because we need to do some more planning and then do another large order of material to be delivered in the truck all at once. The door has a padlock on it so we can lock it from the outside which keeps curious cows out, but of course won’t do much to keep the odd cheeky intruder out 🙂 Now at last we don’t have to worry about the cows wandering around – and they were quick to make the most of it too! 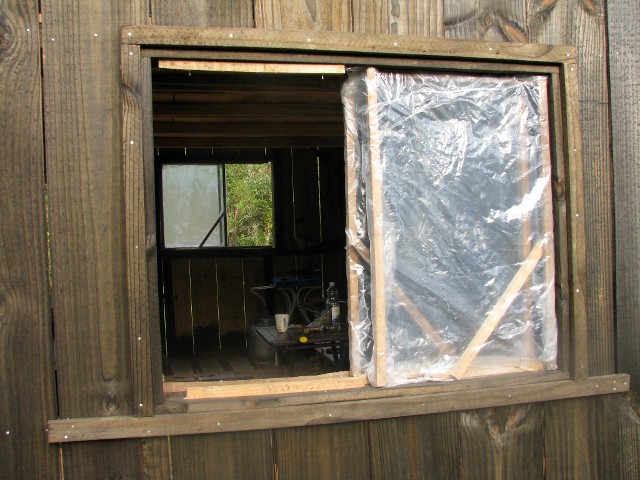 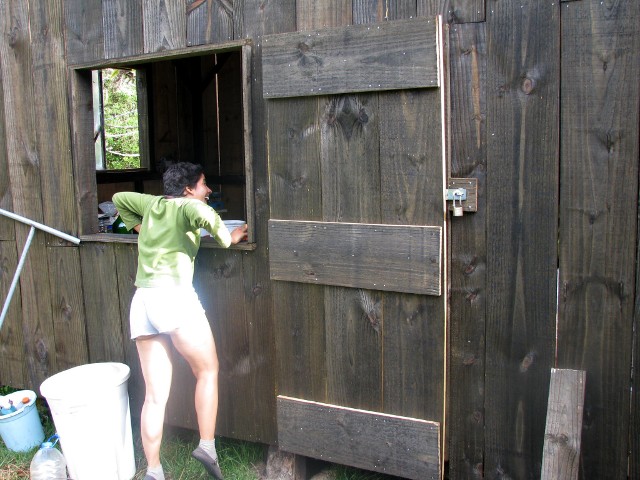 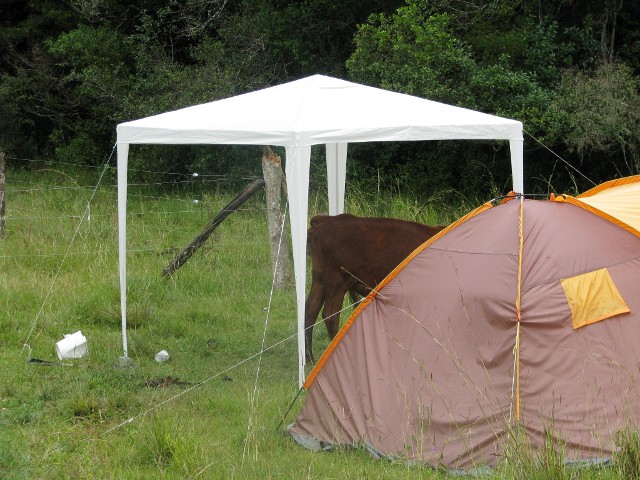 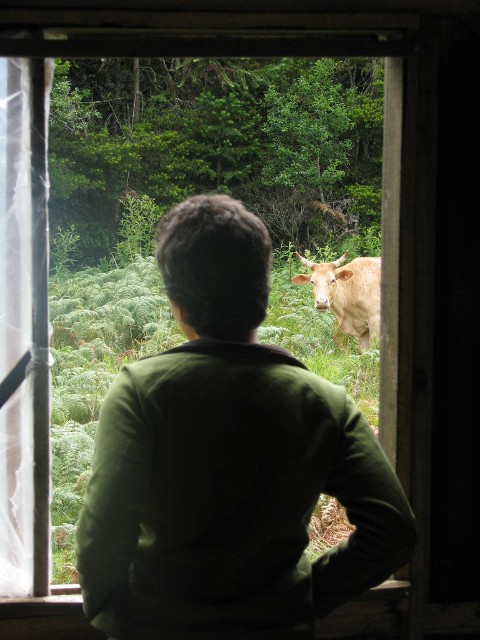 So with such good progress on the house situation done I decided to make some more progress on the net connection during the weekend. First I made a small wooden box to put at the halfway point in which to house a hub to relay the LAN signal (the Ethernet standard has a 100 metre maximum length for any single network segment). I used fencing wire to hold the main weight of the cables and hung them down loosely under it, and then used a wire tightener to lift it up to a reasonable height. Note that the network and power cables are connected at alternate positions along the fencing wire – this is done because AC power and signal cables should not be run in parallel. One of our big fat Argentinian lizards was curious about what was going on in its swamp and came to watch while I was attaching the cables to the fencing wire 🙂 See our rural net connection for more photos and information about this project. 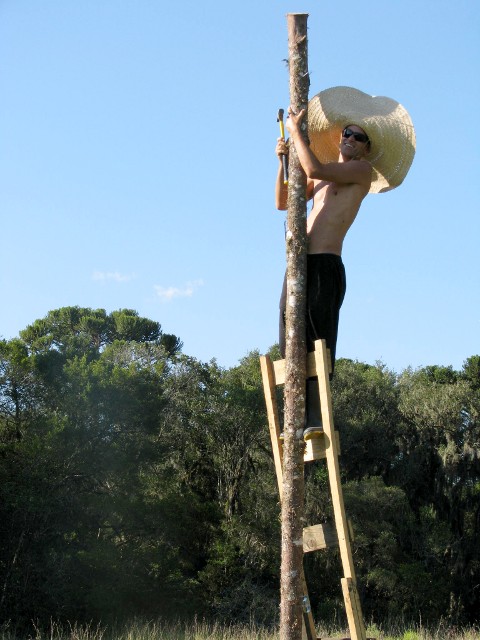 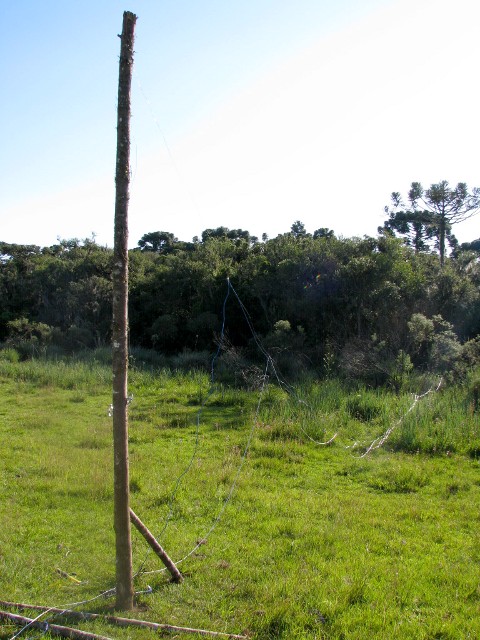 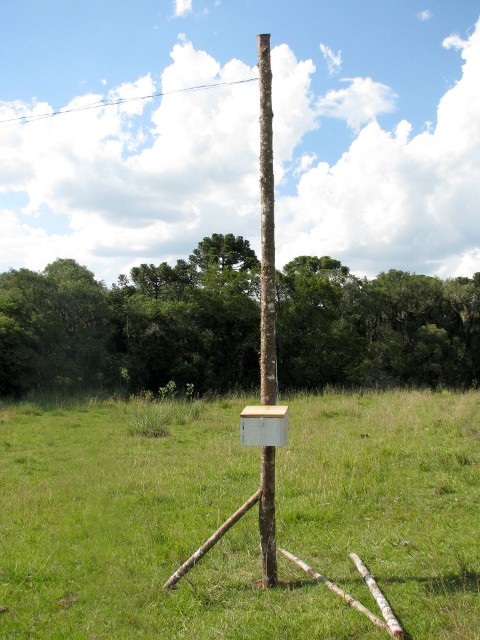 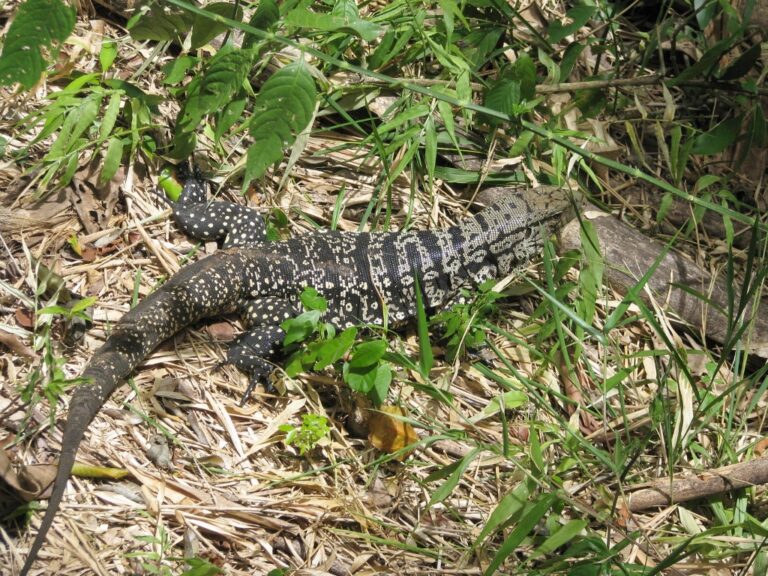 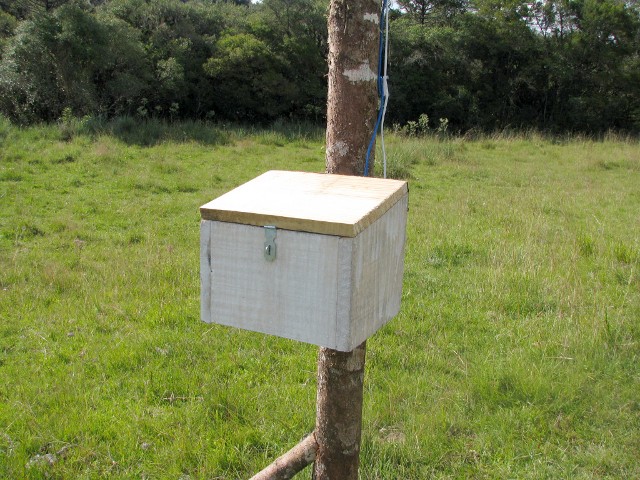 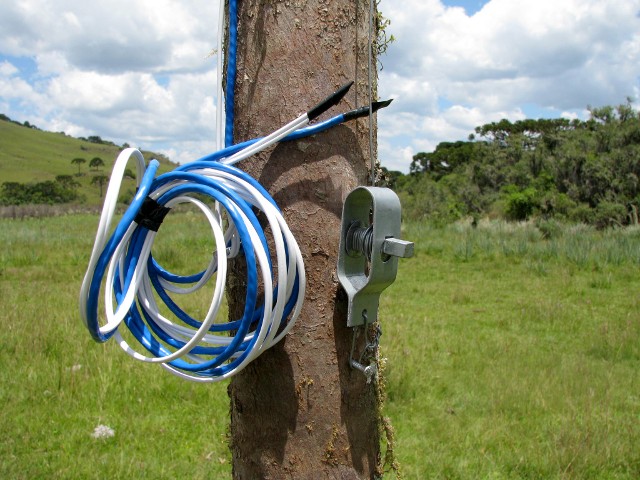 While I was working on the pole and cabling, Beth was experimenting with different combinations of readily available resources from which to make putty to seal up the gaps between the wall boards such as sand, clay, burned oil and saw dust. We’d prefer to use the sand and clay from our own land rather than buy more wood if it works well enough, as we have an excellent source of good sand at our little beach and really good sticky clay only a foot under the ground on the side of our hill. 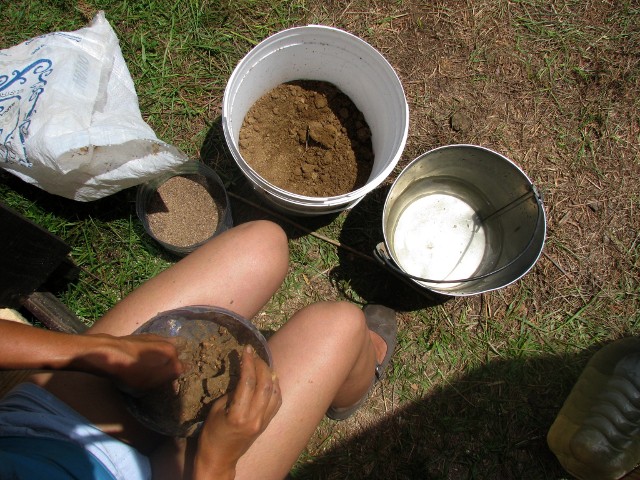 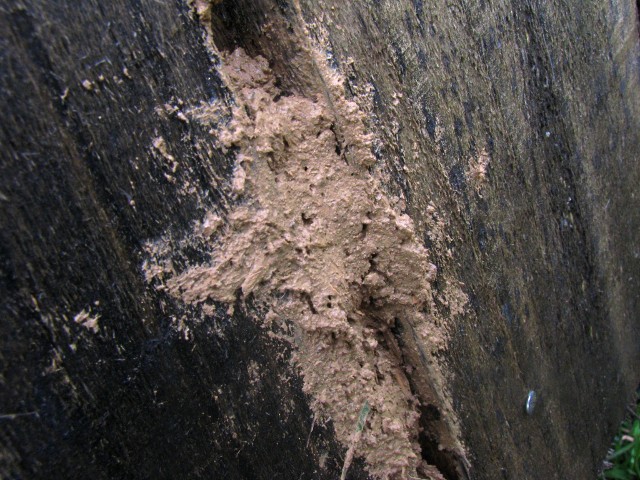 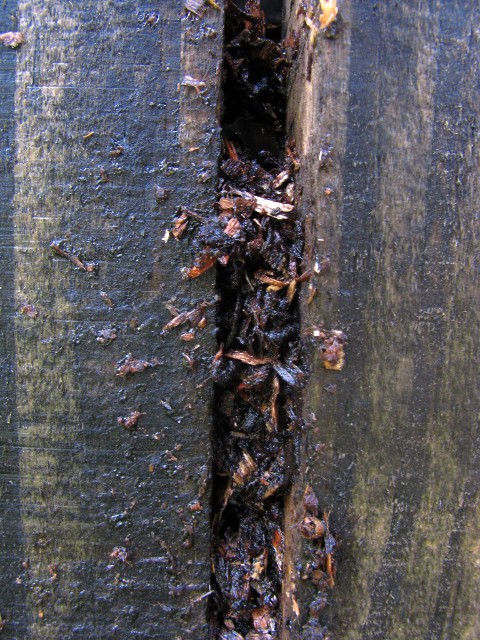 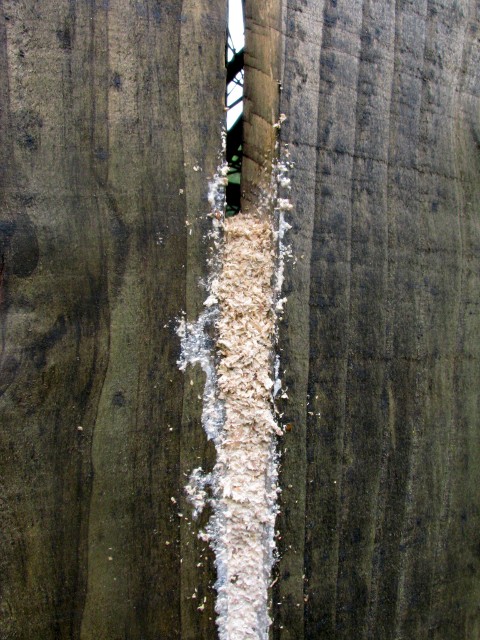 Then finally on Sunday, after a couple of photos of insects and bugs, it was time to set off back to Canela for the week – on bike! the weather was fine and we decided to see what it would be like to cycle the whole way! Our route would be points A, B, D and E on the map shown above which would take us to the highway, then another 15km from there to Canela. 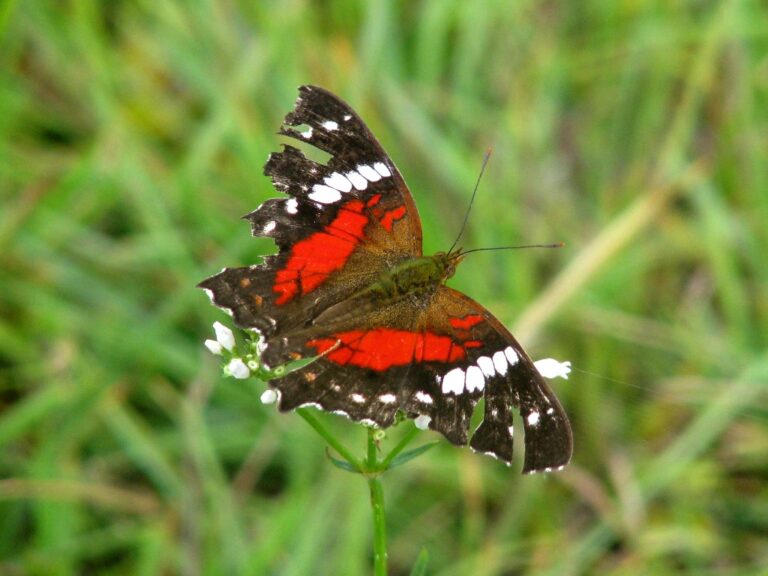 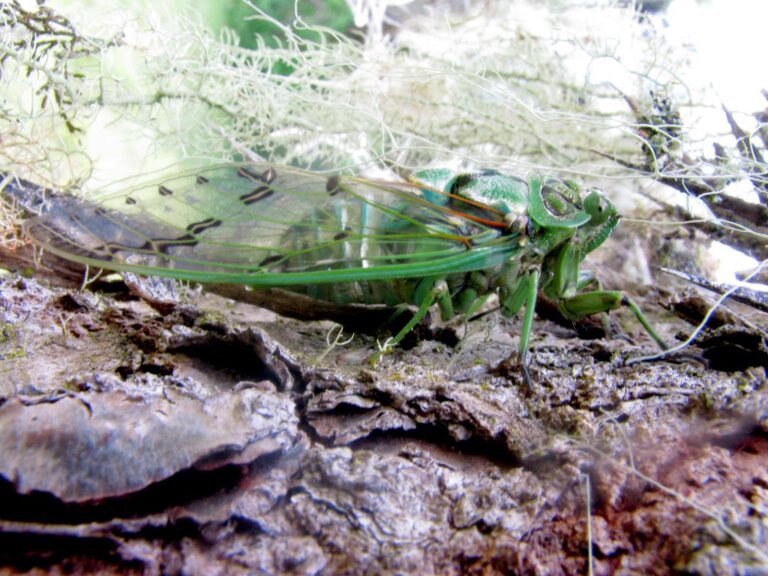 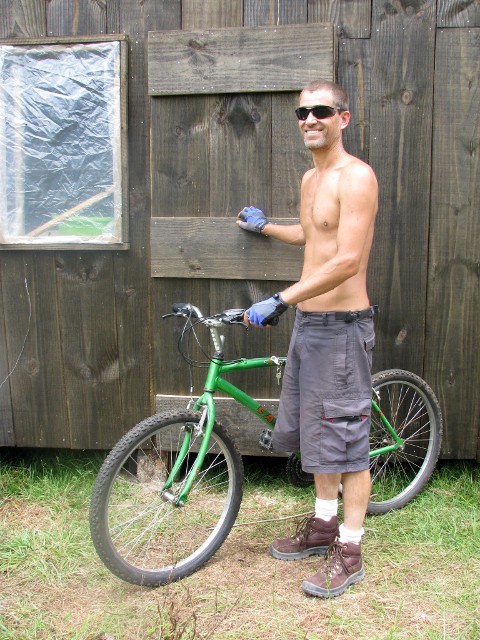 Things started off pretty well and it was a really nice ride for the first hour – who’d have thought that on a hot day like that we’d be almost dying from hypothermia only a couple of hours later?! well not quite, but we were shivering in icy winds surrounded by thunder and lightning struggling through mud wearing nothing but shorts and t-shirts!!! we stopped at the dam superette hoping for a hot coffee, but there was nothing hot there to be had unfortunately – one of the locals was kind enough to offer us his hose when he saw the state of our bikes though 🙂 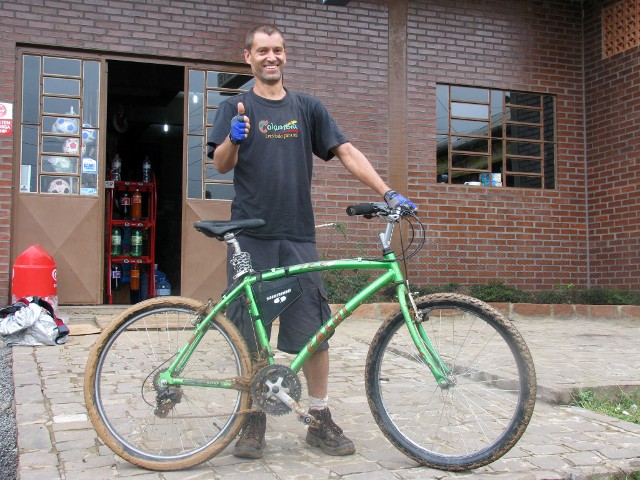 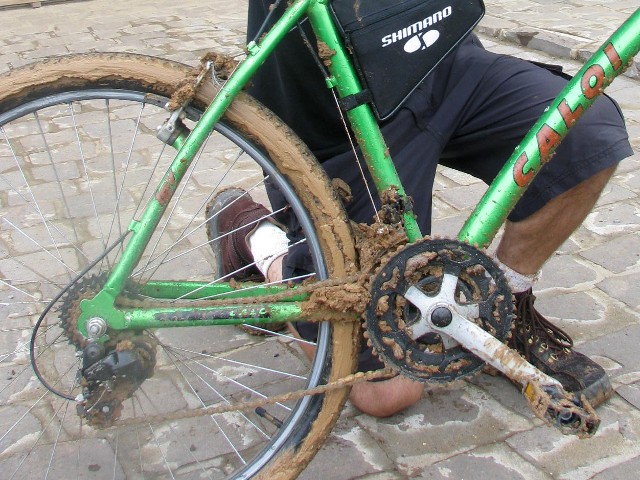 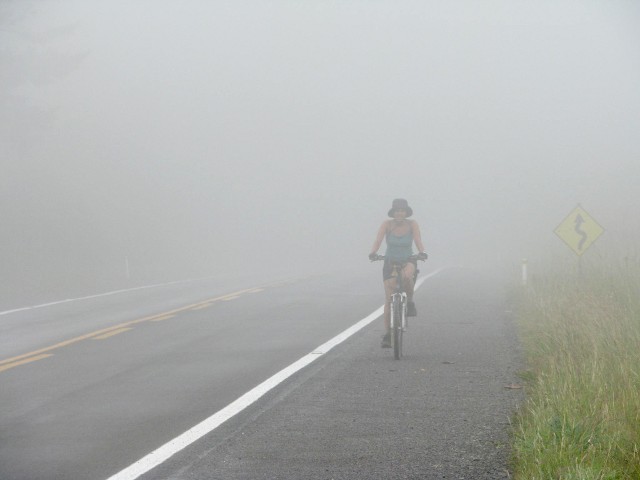 It took two hours forty five to get to the dam, and then another hour and a half to make it along the final 15km of highway back to the pensão which was actually pretty good time, we were expecting it to take about five hours, but it only took four hours fifteen. We were soaked and frozen when we finally made it back – but on the bright side, it did prove that it’d be a walk in the park on a good day – or with appropriate clothing 😉