On Monday the 29th we arrived in Brasília, the capital of Brazil. Beth and I arrived in the morning after more than twenty four hours on the bus. We arrived later than expected too because our bus arrived in Curitiba nearly two hours late due to being held up by a protest. The protest was in São José, a small city just south-east of Curitiba, which has a very dangerous stretch of motorway that a girl had gotten run over on a few days prior. Then during the protest which was occurring just as our bus was on its way through one of the protesters was run over and killed too!! well at least the protest should have made a very clear statement about how dangerous that section of the road is! Here’s a picture of the route for our last leg of the journey, and a hazy photo of the sunrise taken through the bus window which matches our mood at the time! 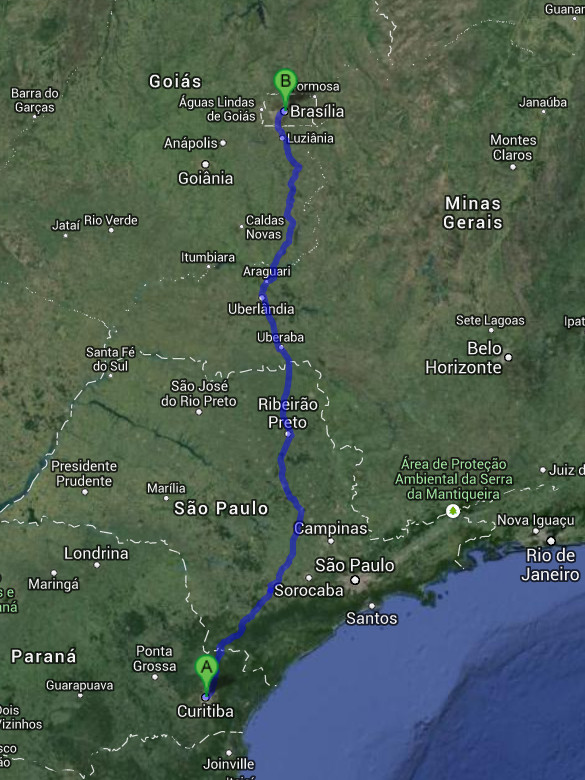 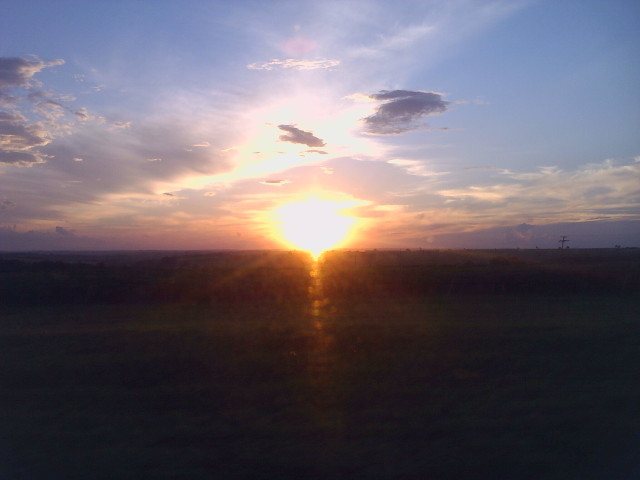 Brasília and its District are located in the Central-West region of the country, along a plateau known as Planalto Central. It has a population of about 3.6 million, making it the fourth largest city in Brazil.

As the national capital, Brasília is the seat of all three branches of the Brazilian government, legislative, judicial and executive. The city also hosts the headquarters of many Brazilian companies. Planning policies such as the location of residential buildings around expansive urban areas, as well as building the city around large avenues and dividing it into sectors, have sparked a debate and reflection on life in big cities in the 20th century. The city’s design divides it into numbered blocks as well as sectors for specified activities, such as the Hotel Sector, the Banking Sector or the Embassy Sector.

The city was planned and developed in 1956 with Lúcio Costa as the principal urban planner and Oscar Niemeyer as the principal architect (see also the Oscar Niemeyer Museum in Curitiba). On April 22 of 1960, it formally became Brazil’s national capital. Viewed from above, the main portion of the city resembles an airplane or a butterfly as can be seen in the following image (click on the image too see more detail). For more information about the city and it’s interesting structure, see our Brasília category.

Mum and Dad arrived later in the evening and we stayed for our first night all together at Beth’s parents house. The house is about an hour out of the main city in Brasília on about ten hectares of land. It’s a very hot climate there so they’re growing lots of tropical fruit. They also have chickens for eggs and cows for milk and grow sugar cane and corn. 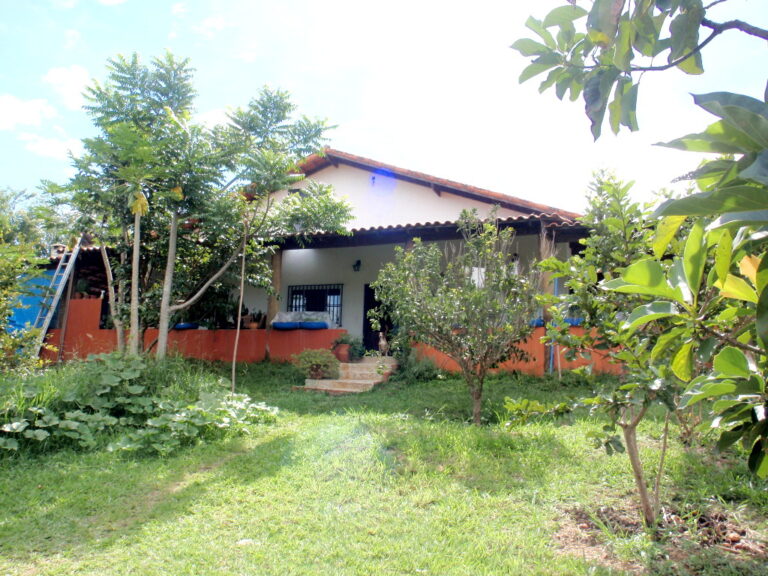 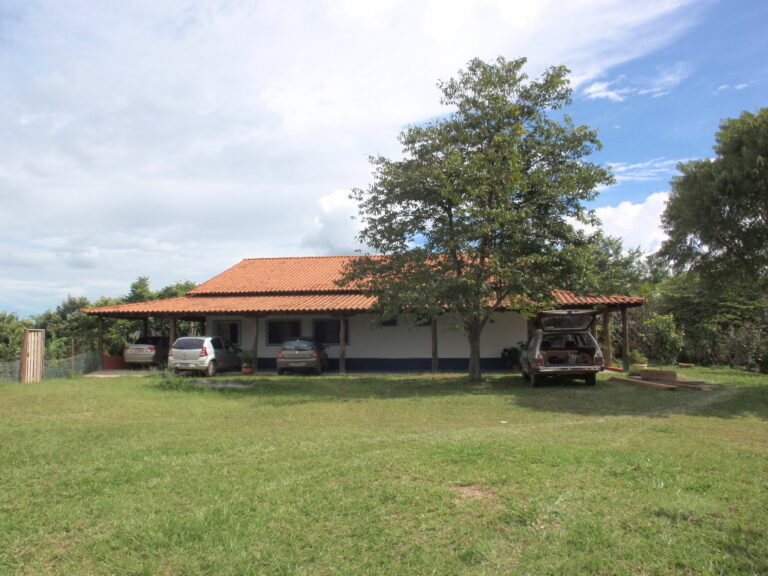 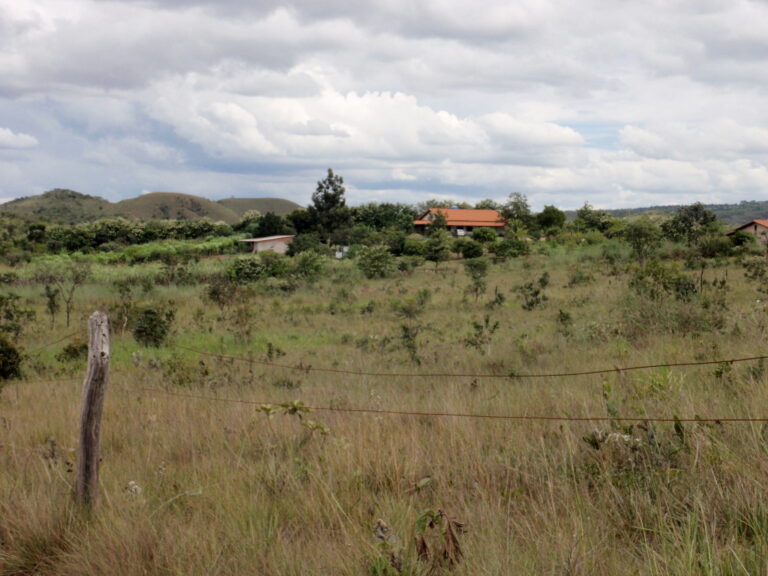 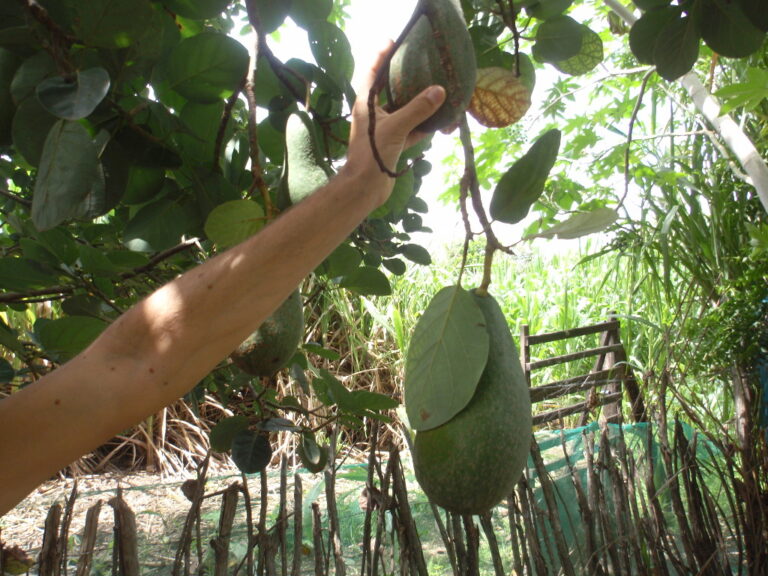 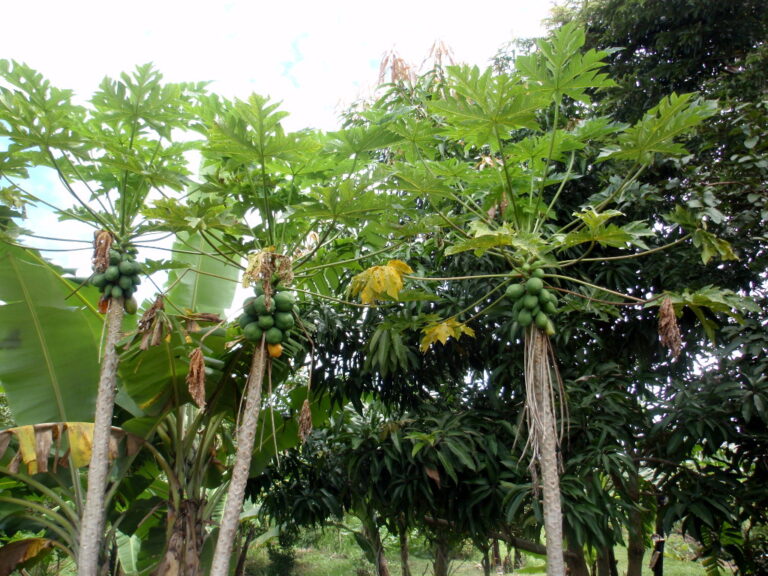 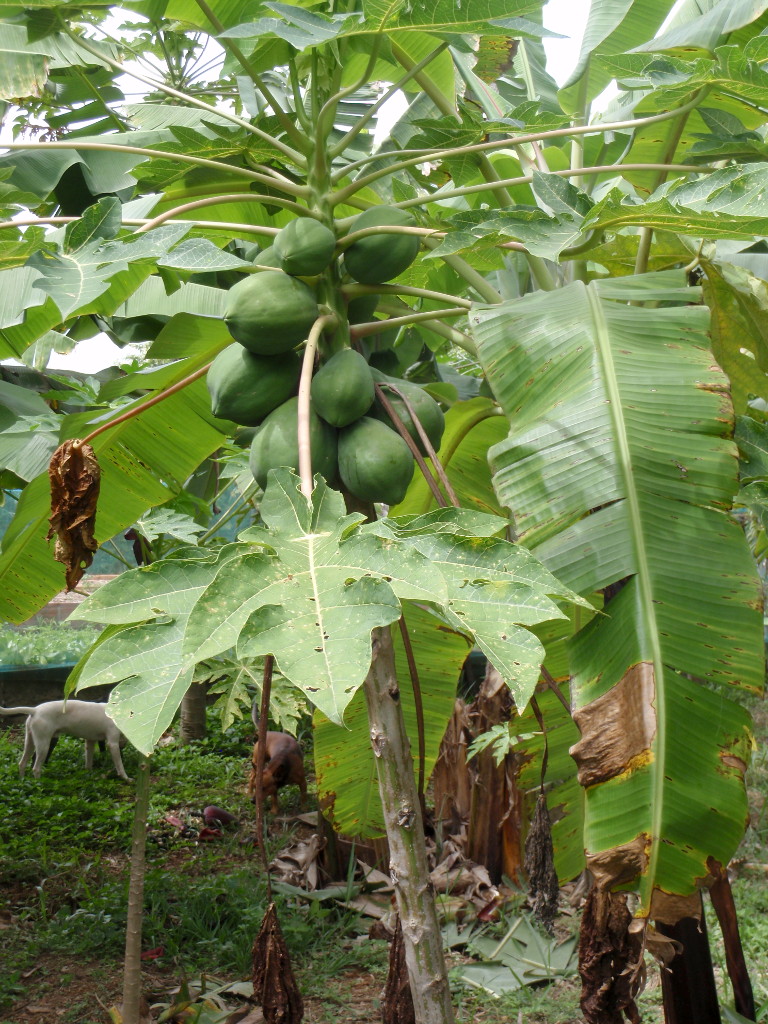 We spent the first few days there just relaxing and recovering from our travels. We had a quick look at the city when Beths Dad needed to buy some construction materials and we went to a nearby market to buy some fruit. The market wasn’t as well priced as what we’re used to in Curitiba or down south, but was still quite interesting because it had a huge range and quantity of tropical fruit and also had an area where they grind herbs and spices such as cumin, paprika and various teas right there on the spot.

Beth needed some time to get centred and catch up on silence and meditation, but her sister Rosie (pronounced “Horzie”) kindly offered to take Mum and Dad out on some of the visitor tours and learn about the city and some of it’s most important features and buildings.

One of the outings Rosie took us on was to the Palácio do Congresso Nacional (National Congress Palace) and the Palácio Itamaraty (Foreign Ministry Palace) which were both designed by Oscar Niemeyer. The first photo shows the Congress Palace which looks very interesting from the outside but is (in my opinion) pretty ugly and “boxie” on the inside. The tour through this building was a couple of hours long and guided by a very energetic and passionate women who really seemed to enjoy explaining all the details of the governmental process. Unfortunately they don’t have English guides on weekends so we understood very little and Rosie could only translate the most important points as there was a great deal of information delivered continuously and rapidly!

The Palácio Itamaraty was an awesome building, one of Niemeyer masterpieces in my opinion, the bottom floor is a 2200 square metre area without any support columns – that’s about ten times the size of Mum and Dads whole house! This room is almost empty apart from a small permanent stone seating area with a interactive art piece in the middle (the photos below show a configuration Rosie and I had just made – some of the layers were stuck so we have to make the most natural shape we could that passed through the immovable ones 🙂 and a pool with Amazon plants in it at the far end. The building has three floors and contains many huge conference and guest rooms containing many amazing art works, the golden one shown below is called the screaming woman and is on the top floor over looking the other buildings.

We went to quite a number of different restaurants and markets, but one really worth a mention is the Sebinho book shop and café. This is a really nice place to spend a few hours when in Brasília. It’s a second hand book shop and has a huge range in English, Portuguese, French, German and more. There’s plenty of seating both inside and outside with lots of shade and a very nice café so you can eat drink and read as long as you like. Mum and Dad bought a stack of books and we read for an hour or so while we had coffee and beer. They have wifi too, so I was able to get a bit of work done while the others read their new books 🙂

On Sunday night we all had dinner together (Except for Rosie’s partner Bizerril who couldn’t make it that night). The first picture shows Beth’s parents in the middle, Beth’s oldest sister Patrícia and her partner Nelson on the left, Beth with the middle sister Rosana and of course Mum and Dad on the right. I’m not in that picture as I’m taking the photo. Later Mum had a special announcement for the family – her original wedding ring was too small for her and so had been kept aside for a special occasion, and last night at dinner when we were all together she gave it to Beth 🙂

The holiday’s rapidly drawing to an end now with only two full days left before Mum and Dad begin their flight back to New Zealand 🙁 Dad took everyone out to lunch at a buffet called Mungai that’s considered to be one of the best restaurants in Brasília. It was very spacious and there was a very wide range of quite typical northern dishes, with some quite strange ones such as snake’s armpits (there’s a lot of barren desert in the north, so they have to eat anything they can find!) This was the second time that all ten of us had been together at once, and the first time we could get a photo since one of the waiters was able to take it for us 🙂 After that we all went our separate ways, with Mum, Dad, Beth and I going for a relaxing walk around the botanical gardens. Mum wanted an ice cream to cool down and she couldn’t understand what it said on the packet, but got it anyway since it looked nice. When she tried it it tasted quite odd, so she asked us to translate it, and we found that it was a guava and cheese ice block!!!

It’s the 10th of April today, Mum & Dad’s last day in Brazil. They really enjoyed it over here seeing such a variety of cities and nature with all the similarities and differences compared with New Zealand. They were really happy meeting this new side of the family too, and Beth and I were so happy to see how well everyone got along together even through the difficult language barrier!

We travelled around seven regions together over the last six weeks which has been more than 4,000km! But as you can see from the maps below, Brazil is enormous and our travels have barely scratched the surface! Another holiday or two will be required to explore more of the north east and Amazonian regions of the country 🙂 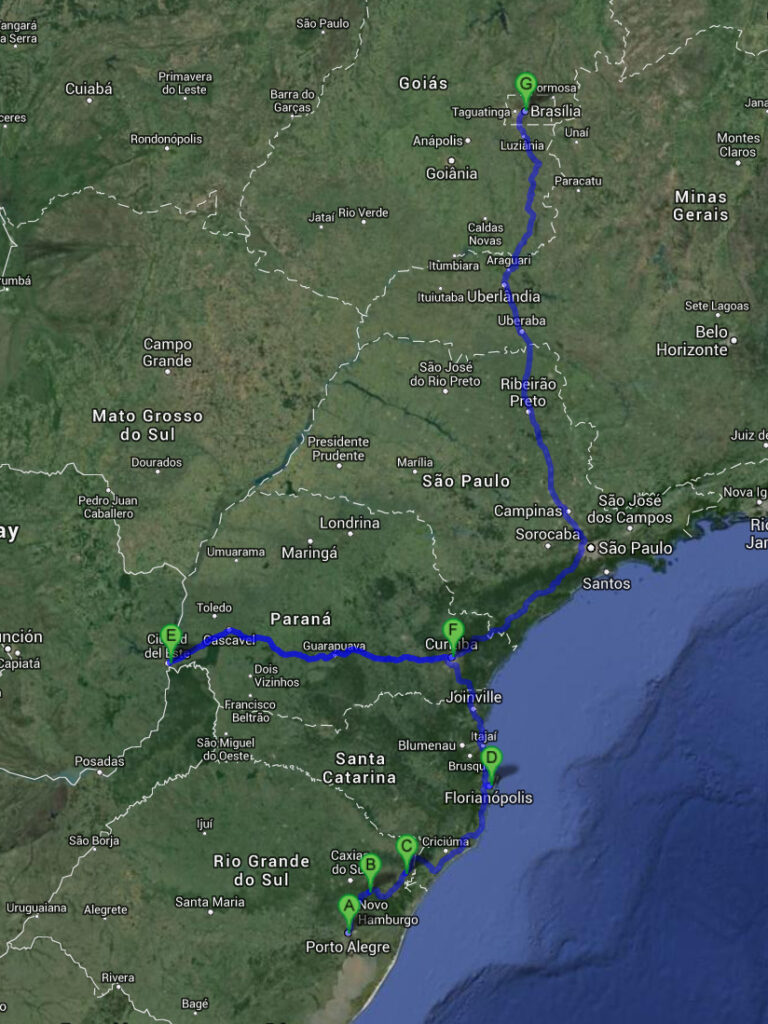 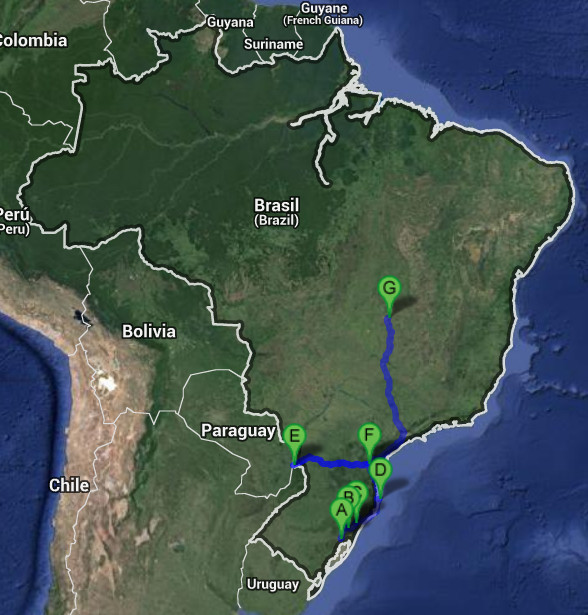 We all got up at 8am to have breakfast and to say some final goodbyes and then left for the airport at about 9am so we’d have plenty of time before their flight at midday. The check-in process was a lot quicker than expected taking only about 5 minutes, so we spent our last hour or so together at a café in the airport and then said a final goodbye at the departure gate. Hopefully it won’t be too long before Beth and I are over in NZ for a visit and maybe some of the Brazilian side of the family will come over while we’re there too 🙂