This is the last week of our first year living on the land, and our two-year anniversary of living in Brazil! and what an intense day it’s been – it’s been thunder and lightening all last night and most of today, and then about 2pm a flash flood swept in and completely swamped the garden leaving only a tiny area where the house is. It was quite scary because the water had a very strong current, but we reasonably sure that even if it covered the whole garden the house would stay firm. The PVC pipe containing the net cable was being pulled violently by the current and I had to bend it round some nails in the tree next to our house, so when the weather clears up, I’ll need to make the pipe more firm and perhaps raise it up a bit.

The water started finally dropping down yesterday evening and we were able to get through to the field to see what it looked like over there. All our wood had been picked up and scattered throughout the field – wood that we’d already moved higher up the hill after it was scattered about by the last flood! This time it looks like the water probably would have got to the level of the internet pole – you can see from the photo below that it’s quite close to it, and that’s taken after the level had dropped enough that we could get through the forest. We went to look at the other river too which must have been a lot higher as it had picked up our bridge and tossed it to the side!

The rest of the week was a bit more productive, the main thing I did was to finally get the north extension completed! The north one was the most difficult because I had to use the existing foundation poles that had been originally put in to make a larger house than we ended up making, but they weren’t in quite the right place for the extension, meaning it’s a bit of a strange angle and longer on one side than the other – and meant there were some difficult yoga moves required and some frustrating difficulties along the way – it looks a bit more artistic though 🙂 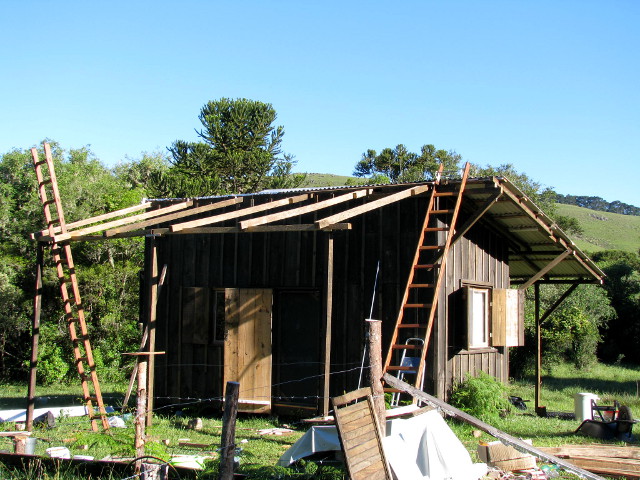 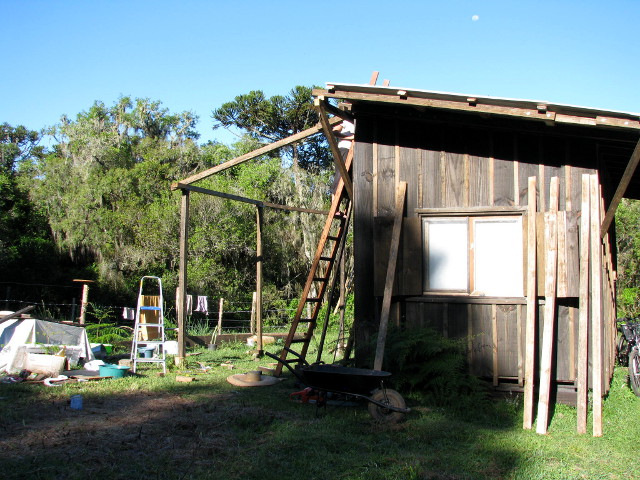 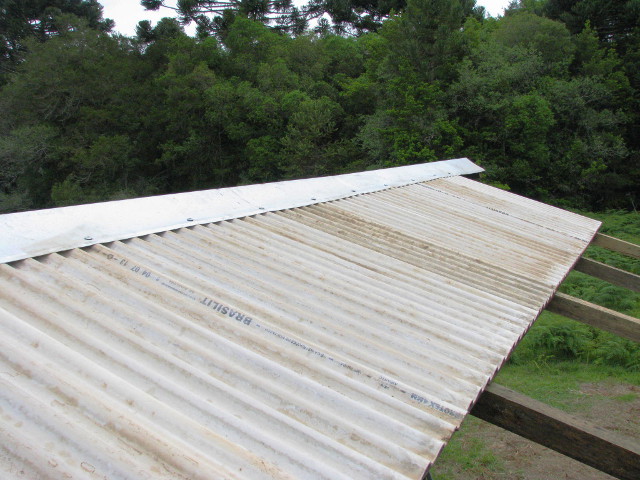 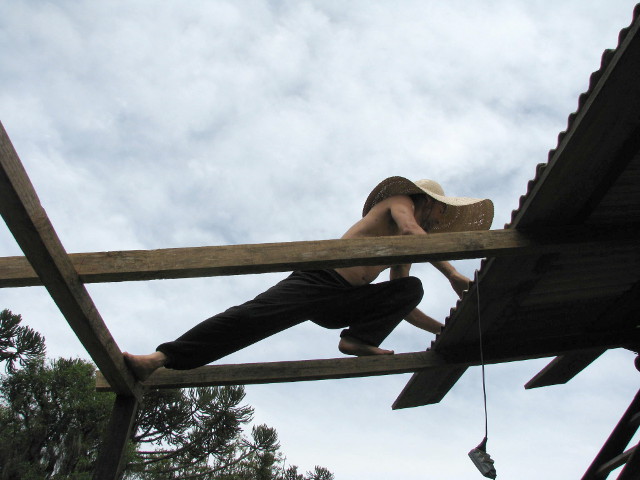 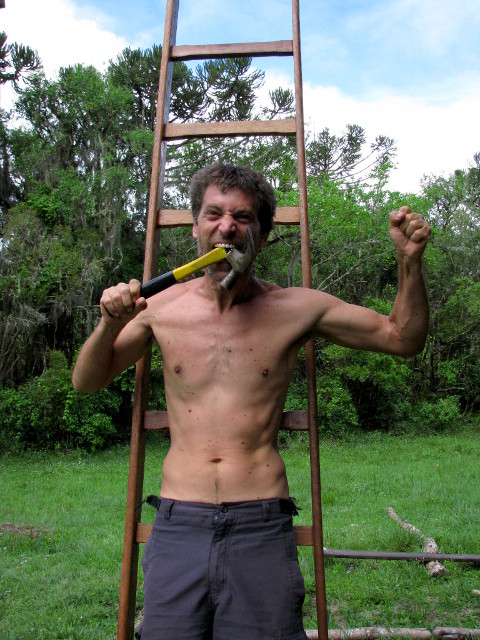 Meanwhile Beth set to work on the mosquito nets for the windows and the door, which are extremely important because summer is almost here and the mosquito population will explode any time now, and also the horse flies are just starting to show themselves. Horse flies are huge yellow flies that all latch on to you as soon as they see you and stick their long syringe painfully into you often drawing blood even through thick clothing! The door screen was the most difficult so she was really pleased when she’d finally completed it and it was working successfully 🙂 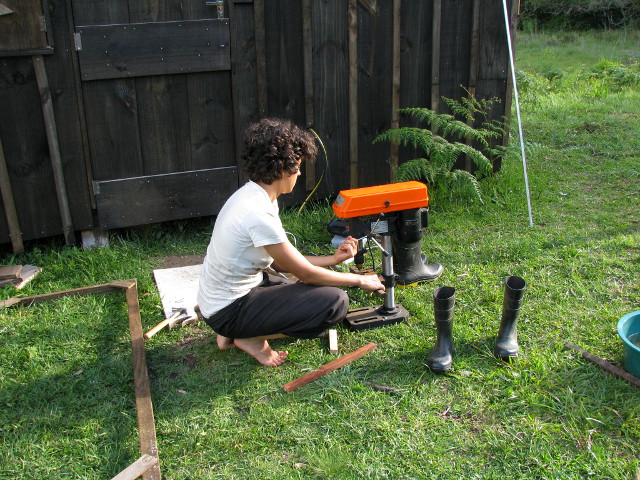 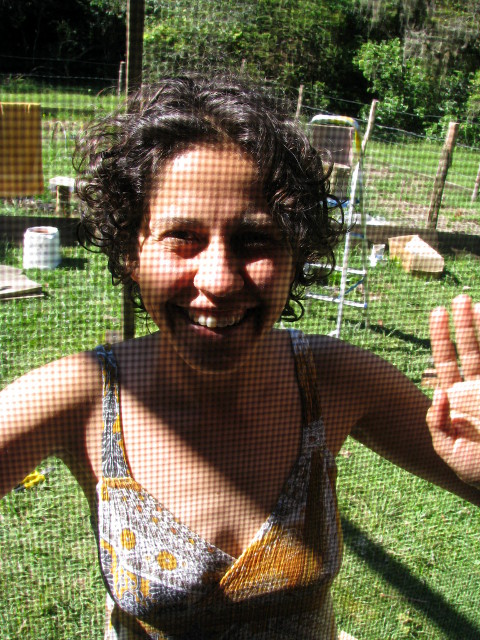 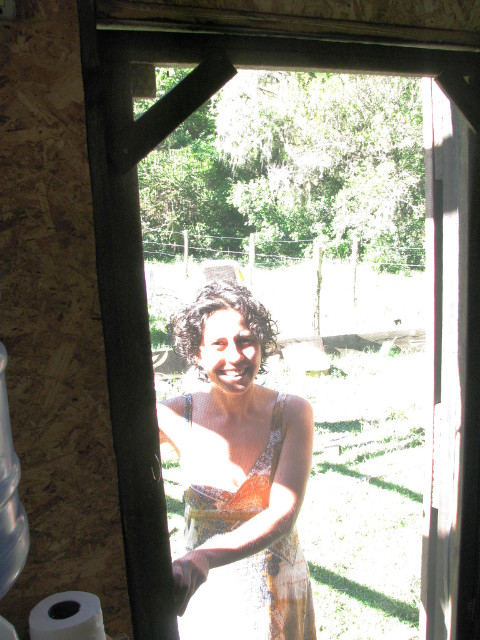 We ended the last week in our first year on the land by going to Canela to celebrate! it was also a celebration of our two year anniversary in Brazil which we were supposed to do last week but couldn’t get out due to the flooding! I didn’t take the camera to Canela so there’s no photos of our beer, pizza and coffee, but it was a very nice end to our first year on the land 🙂