This week started at the land instead of back in Canela – that’s because in the weekend we took the completed solar panels to the land and have successfully installed them! I first made a temporary support for them so that they could easily be brought inside if the cows came to investigate or it started raining (I’m not quite ready to put them to the weather test yet :-/), and so we can easily position them towards the sun.

Next I connected up the battery, charge controller and inverter and tested the voltages, and then connected up a 5W LED light bulb to ensure everything was going as it should. Everything was working fine, but unfortunately one of the panels did suffer a little damage during the trip – it’s difficult to pack such a heavy but fragile thing well enough to handle 20km of extreme roads 🙁 also I noticed that both of them have moisture inside, so we’ll need to think of a way to deal with that – perhaps by making a tubular silica moisture absorber and poking it in through a small hole in the back?

After everything looked good, I connected up a light socket in the centre of our only room and a switch by the door, so that evening we had proper light for the first time! it wasn’t all that bright as we only have a single 5 watt LED bulb here at the moment, but it did the trick and was running for four or five hours no problem 🙂

Ok so getting the panels and our house light going was actually week twenty seven as it was on Sunday – the first thing this week was to get the antenna installed in its permanent position and hook the router and laptop up to the inverter! Once that was done the first thing to do was to start writing this blog update 🙂 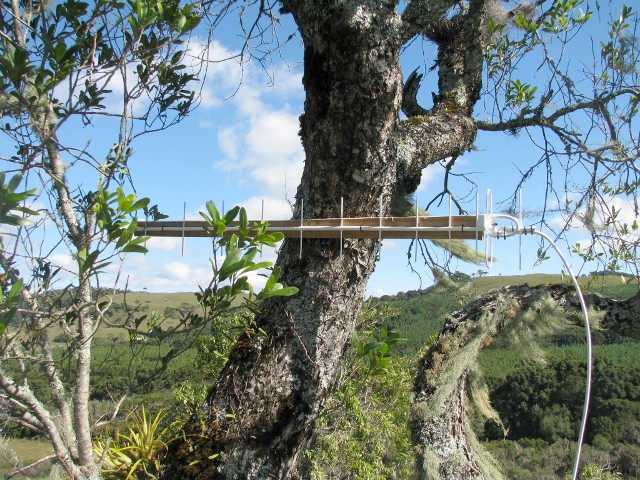 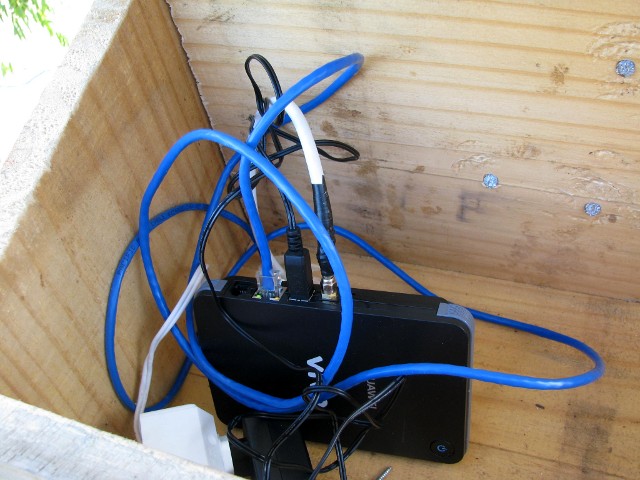 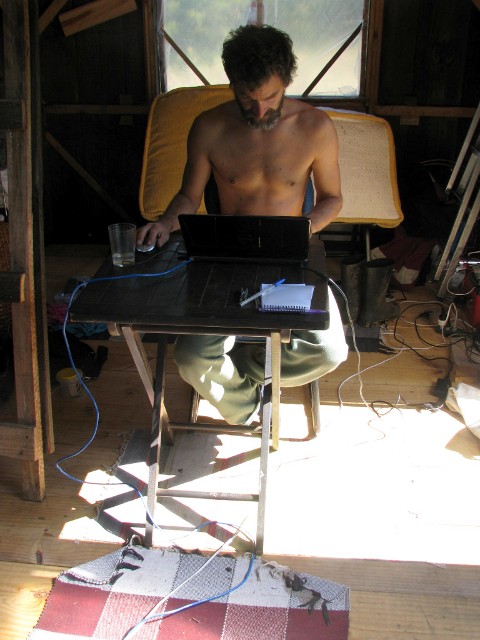 Candido, his wife Celia and some of their friends came to visit on Sunday as well (ok it should be in week twenty seven too, but too bad, I’m here in twenty eight now). After some coffee they went into our small forest to collect Pinhão from the Araucária trees which are very common around here. The Pinhão nut is very similar to a Chestnut in texture and flavour. The way to get them is to climb up the tree with a long stick and prod all the fruits that are ready so that they break open and all the nuts (often a hundred in each fruit) pour to the ground. The trees are very tall and have no branches for the first ten metres or so and the trunks are too wide to reach around, so the climber uses a rope and special boots to climb the tree as shown below. 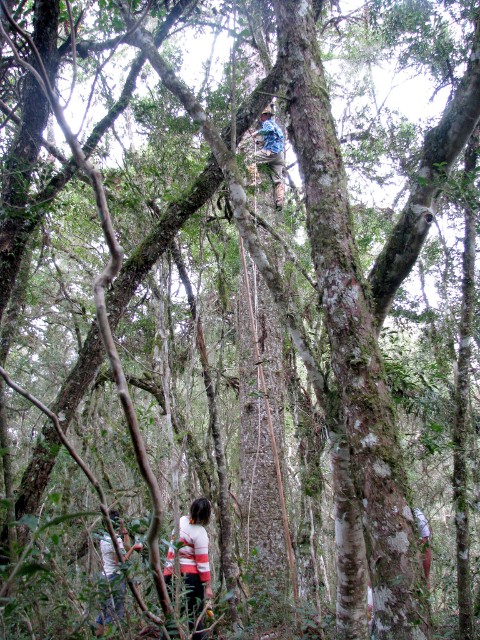 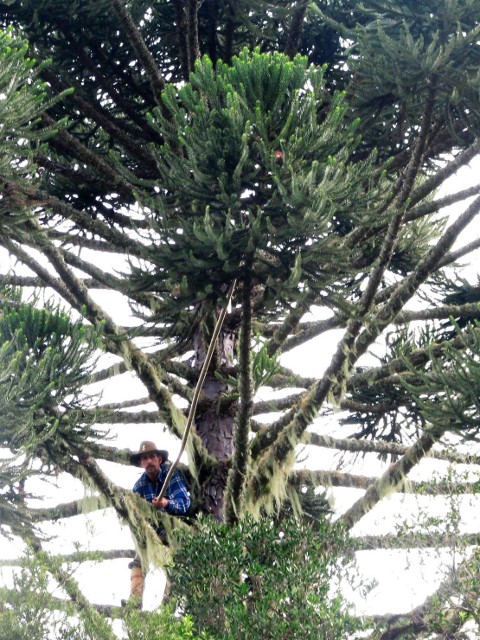 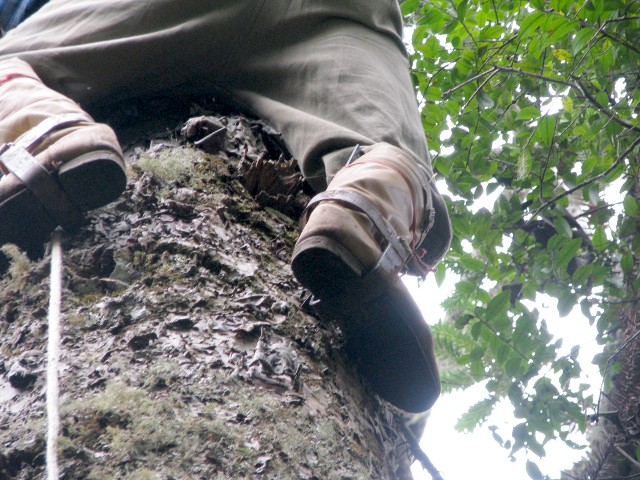 Here’s Beth making mud cement to block up holes to prevent our local mouse from coming in and annoying us at night, and holding up some pumpkins which she found by complete surprise in the vege patch and another two showed up an hour or so later 🙂 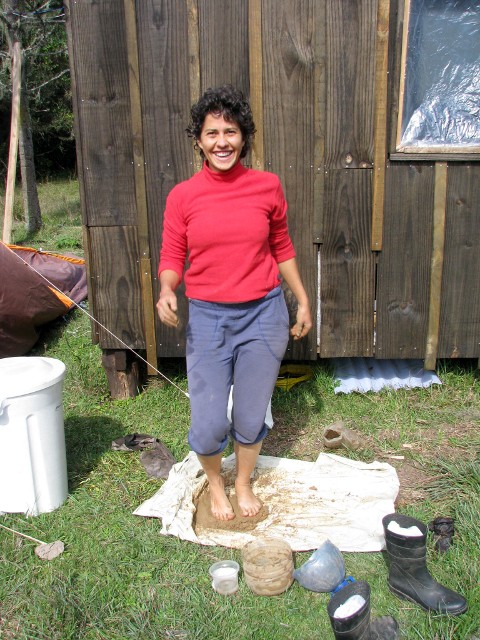 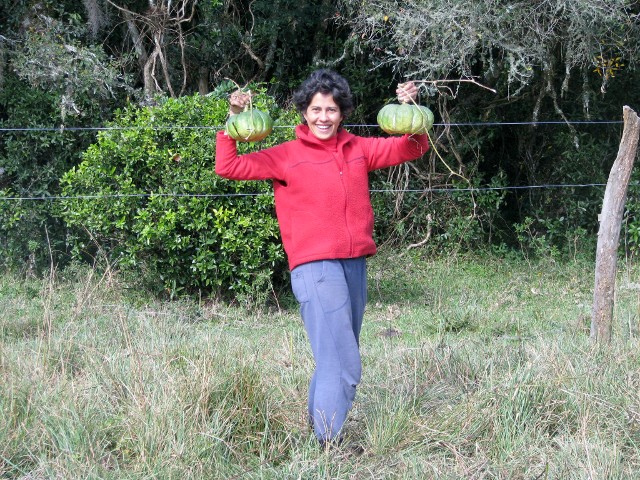 Last night we put some of the Pinhão in the fire that Candido and the others had left for us. After a minute or so they pop and the outside cracks indicating that it’s ready to take out and eat 🙂 They’re very similar to pine nuts, in fact many people don’t know the difference, for example the English wikipedia article for pine nut links to the Pinhão article in the Portguese Wikipedia. The normal pine nut is called “Pinha” which comes from a pine tree (Pinheiro), and “hão” on the end of words means “big”, so Pinhãos are big pine nuts 🙂

Winter’s on the way now, it’s still quite hot during the day in the sun, but it gets really cold at night and there’s quite a frost starting to appear in the mornings now.

Some good shots of our local swamp birds 🙂 these birds are really similar to our Oyster-catchers in Devonport, they’re a similar shape and have the same long beaks, sound the same and have similar mannerisms, but they’re not black and they eat swamp bugs instead of oysters.