We made our first panels (2x75w) at the end of 2012, and then made another two 150w panels about a year later. These have served us very well, but we’ve finally decided to replace the whole set up with a completely new and more powerful system.

First I took all the old home made panels and structure down. The first pair of 75w panels were in pretty bad condition! one of them had stopped working completely, but amazingly the other was still putting out about 75% power even though all the wood was rotten and the cells were all broken! One of them disintegrated and fell when I was lowering it down with a rope, but luckily the glass didn’t break. The second pair of 150w panels were still operating pretty well, but the glass in both of them was cracked, the first by super-hail and the second due to the roof and wood slowly bending out of shape.

The new set up involves 6x260w panels with a 1Kw charge-controller/inverter unit and two 240Ah batteries. I had installed the controller and batteries a few days before, and after spending the whole morning removing the old installation from the roof, I only had time in the afternoon to get one pair of the new panels installed. The next session a couple of days later I got the rest of the structure ready for the remaining four panels. I had to raise two of the bottom ends of the vertical metal bars up a bit to compensate for how bent our roof is! Unfortunately this will mean that the right pair will be at a different angle than the others, but it’s better to ensure that the panels are sitting nice and flat than to have it looking perfect. 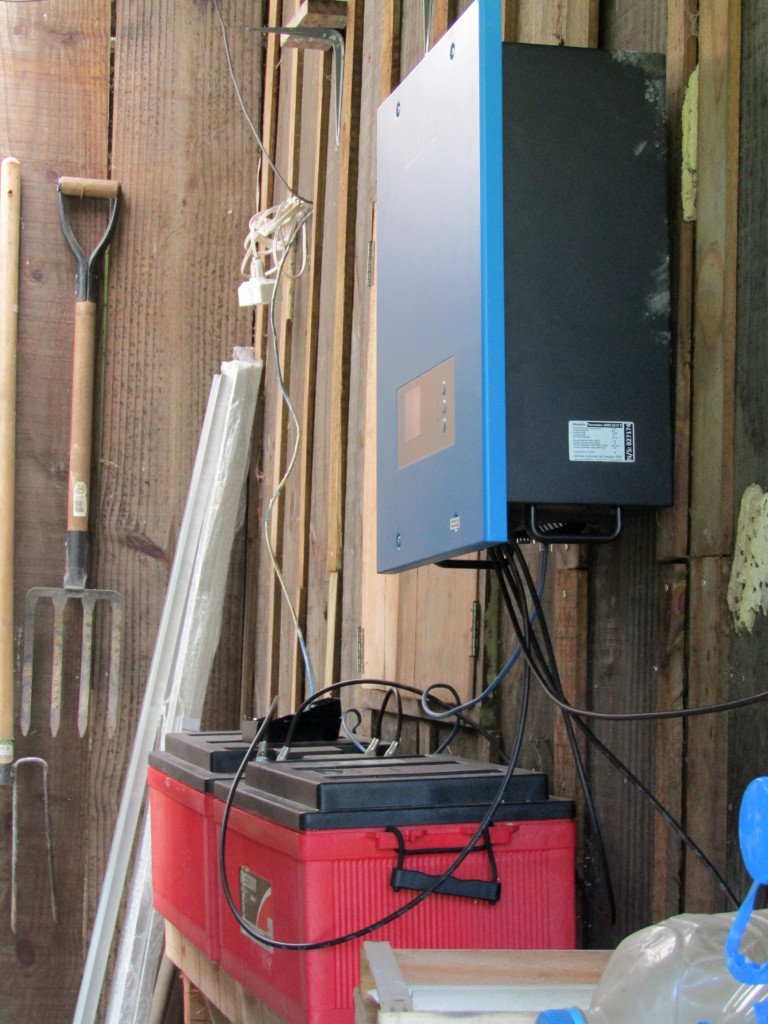 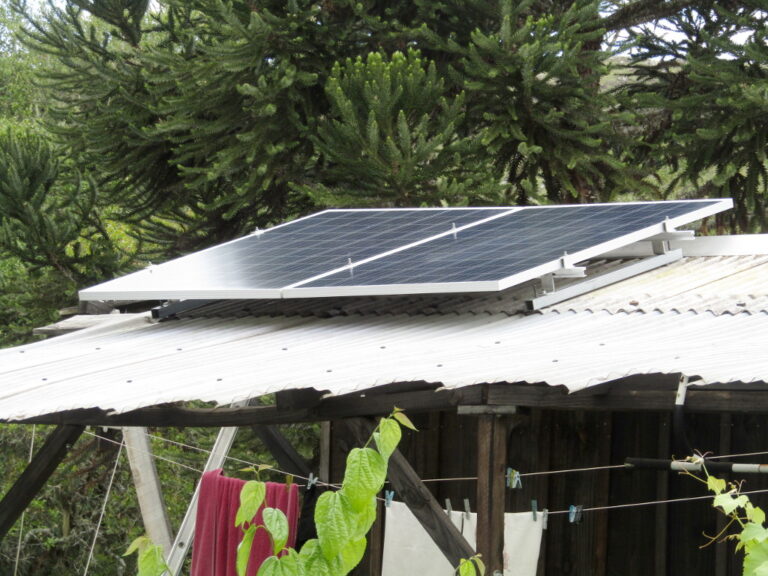 I had to wait a week before I could finish the installation because our panels are 35mm thick, but the clamps only support 40mm panels even though the shop sold them all together. The manual said that the claps work for both sizes of panel but I couldn’t figure out how that can be, the only way I could get it to work was by raising the panel up with a stack of washers! I went back to the shop and asked how the clamps can work for our panels, and after trying to figure it out they came to the same conclusion as me – that they need to be raised up – the odd thing is that nobody had ever reported this problem to them! I got a bunch of 5mm steel pieces to raise them up more reliably than the washers. 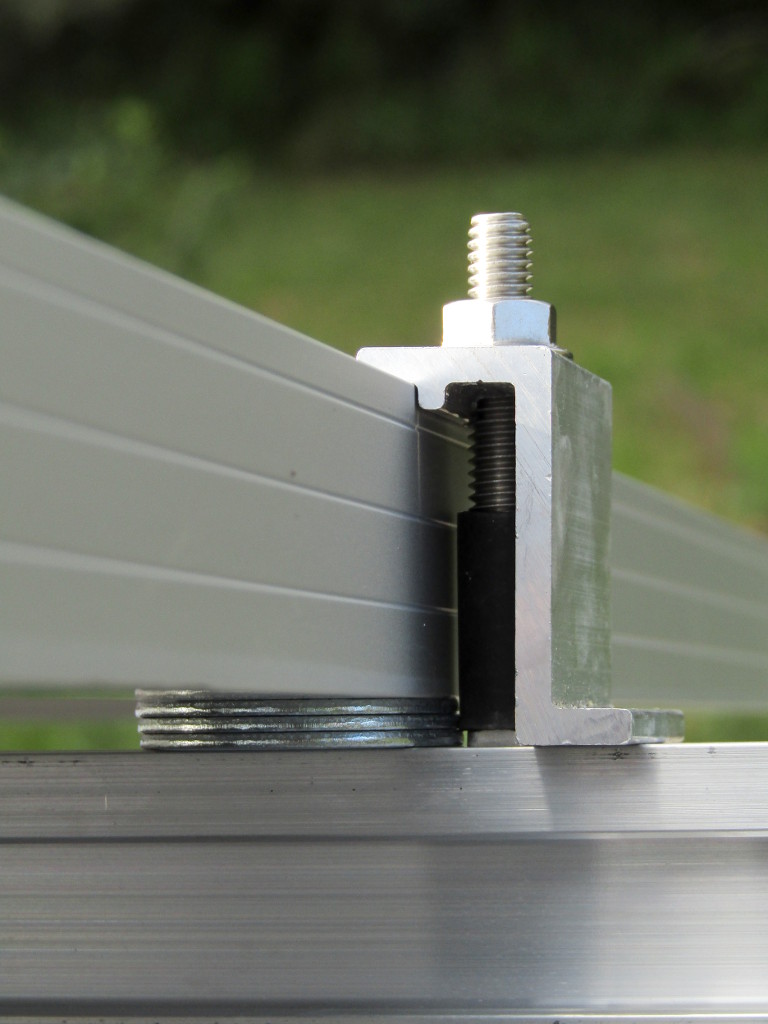 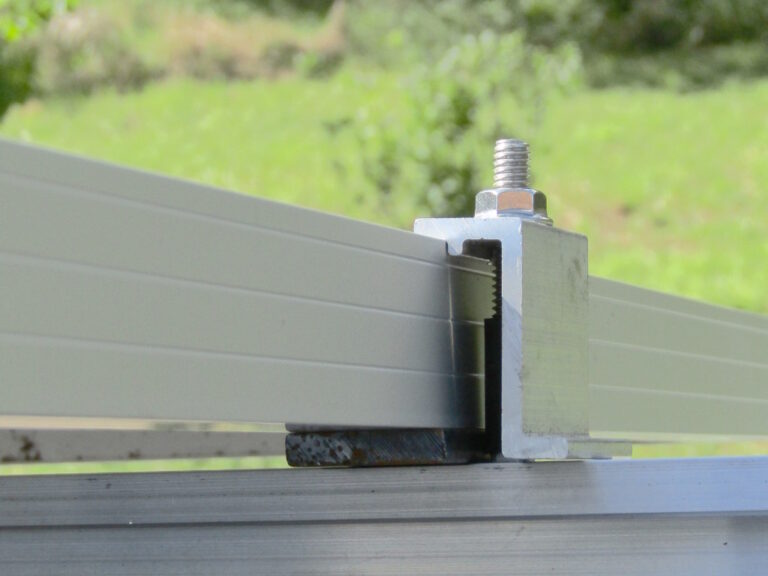 The final session to get the last four panels up ended up taking all day and I put my foot through the roof twice! I’ve just covered the holes with some spare roofing panels for now and will have to nail them in properly later 🙁 I was just using metre long planks of wood to sit on to try and distribute the pressure to protect the roof, but it wasn’t enough, I found that putting the aluminium ladder flat on the roof was much safer and worked well.

Here’s a couple of photos of all the panels up and running 🙂 We can now use all our power tools, the spinner dryer, washing machine and even our vacuum cleaner directly from the inverter!